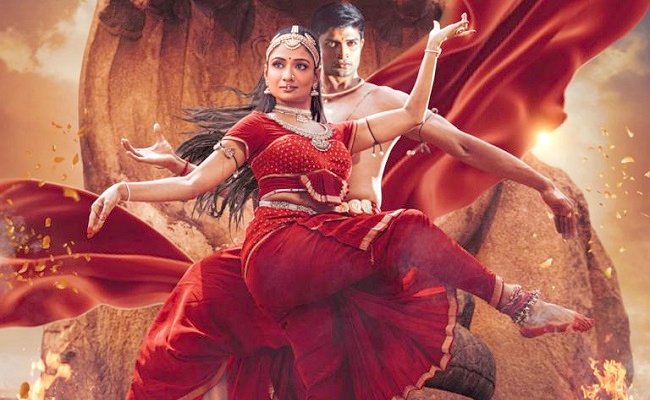 The famous dancer Sandhya Raj comes from a reputed business family in Telugu states. No wonder she has attracted big names like Chiranjeevi, Ram Charan and NTR to promote her first film as an actress.

Her first film “Natyam” has received a lot of publicity with the promotion of the big stars. Let’s find out its pros and cons.

‘Natyam’ is set in a village. Sithara (Sandhya Raj) has been interested in dance since childhood and her guru (Adithya Menon) trains her in classical dance to perform in their temple. He prevents her from performing Kadambari’s story for some reason.

Meanwhile, she falls in love with a city dweller who plans to stage a fusion dance show in the US. On the other hand, her guru’s son also loves her.

With the help of her boyfriend, she tries to perform Kadamabari Katha in their temple before going to the US.

What obstacles does she encounter? And why does her guru warn Kadambari not to execute Katha? Who is Kadambari?

Sandhya Raj is a Kuchipudi dance exponent and she has chosen a story that reflects her true strength. She is excellent at dance sequences. It is in dance performances where she excels, but her performance skills are quite average.

Rohith Behal playing her boyfriend is annoying on screen.

Among the other actors, Aditya Menon and Kamal Kamaraju (he also dances well) leave an impression. Subhalekha Sudhakar plays a typical villain role.

Since the movie is a dance movie, music and choreography have to play a vital role. Shravan Bharadwaj has given some lilting songs, and “Poni Poni” stands out.

Dance choreography is impressive. Cinematography and editing are not up to scratch.

A good intention alone does not make a compelling film. Many filmmakers have failed in that area, and “Natyam” is another example. The attempt to tell a story of a temple dancer from a bygone era is remarkable, but the story is, to be honest, boring.

“Natyam” is more or less a showcase of Sandhya Raju’s dance skills, but for the regular audience. The two-hour lethargic story is a sleep-inducing effort. The aim of the film may be to promote art, but the performance is far from captivating.

Criss-cross between a silly romantic song on Sandhya Raj and Rohith Behal, and the core story of Kadambari (played again by Sandhya Raj), the film charts an unexciting path. Many sequences are painfully bad. The story smacks of amateurism. Sandhya Raj’s expressions at non-dance moments further aggravate the mood.

To be fair, the film works in certain sequences. They are clearly dance episodes. The pre-interval episode is neat too. But the second half continues with irrelevant, unnecessary tracks and sequences.

The film also makes a lot of missteps when it comes to Kadambari’s core story. It doesn’t do enough to get the audience to invest in the story. Despite decent production values ​​(shot in Hampi and other parts), and a better soundtrack, the film becomes an endurance test.

How come even some young filmmakers tell stories in an outdated way? “Natyam”, the story and treatment, is old-fashioned and boring.