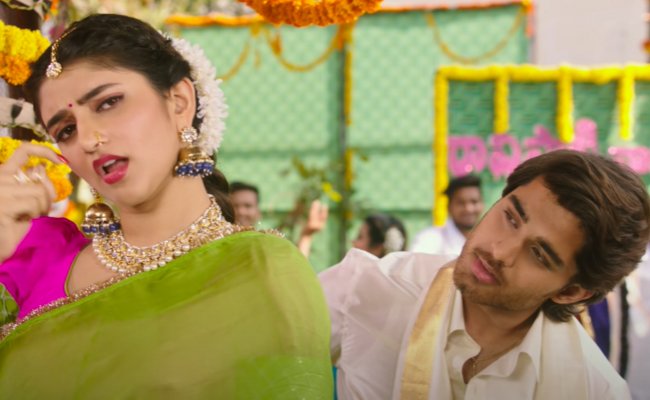 A wannabe filmmaker decides to shoot a biopic about veteran Dhyanchand award-winning basketball player Vasishta (K Raghavendra Rao). Vasishta tells his story to the filmmaker’s father as they take a long walk through a forest to reach a coffee shop.

The story goes back to Vasishta’s (now played by Roshan Srikanth) younger days and his love story with Sahasra (Sreeleela). The difficulties Vasishta faced in winning Sahasra’s love and getting married are the only things you’ll find in this “biopic story”.

Veteran director K Raghavendra Rao made his acting debut in this film. KRR appears for about ten or fifteen minutes. Yes, he’s making an “appearance” because whatever he’s doing here can’t be treated as acting.

Roshan looks good. He also dances well. But he should be making contemporary films.

Kannada actress Sreeleela fits well as heroine of Raghavendra Rao. A lead actress in Raghavendra Rao’s film only needs to do one thing perfectly: show her navel and bosom while fruits and flute and other things fall on them. She can also dance well.

The comedy of Shakalaka Shankar, Vennela Kishore and others is outdated.

The real hero of the movie is MM Keeravani. Songs tuned in Keeravani’s vintage style also bring eye candy to the screen. The richly shot songs will please the general public.

It is agreed that even great directors are out of sync with today’s trends in their retirement years. We have dozens of examples to prove this point. But Raghavendra Rao hadn’t given out such an outdated and pointless story in the 80s as with ‘Pelli SandaD’.

We regularly get to see poorly made movies or boring movies, but “Pelli SandaD” is different. It smacks of laziness in every department – writing, acting and directing. Even a newcomer wouldn’t make up some of the scenes we see in “Pelli SandaD”.

The story of the film takes place many decades ago. But that doesn’t mean it gives permission to write “outdated” scenes and jokes. Heroine jumping from the tree and falling on the hero is the idea of ​​romance here. When Vennela Kishore says he bathes once a month, we should treat it like a joke.

The film opens with a director planning a biopic about Vashista, who won the Dhyanchand award for his excellence in basketball. But he tells his love story to the director’s father then his achievements in sports! No reason and rhyme are found in this mess.

Besides songs, watching “Pelli SandaD” gives you a headache. An outdated movie, however you look at it.